skip to main | skip to sidebar

Bernard continued holding Maxine's hand as he forced all the oil down into the thirsty pores of her crusty skin. She flexed her fingers and popped her knuckles, admiring their smooth sheen, then stroked Bernard's cheek in appreciation. He did not notice the oily smudge on his jowls as he beamed at her in satisfaction.

"Hope I'm not interrupting anything," Rolf snarled sarcastically as he dropped onto the table two crockery plates heaped high with sticky pasta and shiny orange sauce.

"Nay! To the contrary," Bernard fluttered one pudgy hand at Rolf while claiming a fork with his other. "No need to be obsequious. We are indeed a gathering of equals, embarking on this culinary odyssey."

Maxine picked off the sliver of garlic toast from the top of the mound and nibbled it, sending particles of powdered cheese and garlic salt sifting down to the plastic checkered table cloth. Bernard twirled his pasta like an expert Italian while Rolf picked at his soggy greens moodily, casting dark glances at Bernard and hungry ones at Maxine.

"I'm not getting any younger!"Maxine thought impatiently. Two men with her, and both of them suddenly quiescent and boring.

Posted by Carolyn at 9:19 PM No comments:

Angel of the Night, pt 6

Rolf bared his teeth in a victor's smile and wove his way to the smokey back of the hall.

"Now, Maxine," continued Bernard. "Where were we before the young Adonis leveraged his way between us."

"I believe you were holding my hand." Maxine artfully laid her claw on the gray polyesther pinstripes of Bernard's knee.

"Ahh yes." He took her hand with one of his, and with the other picked up the bottle of Extra Virgin olive oil and dribbled a few drops onto the withered back of her hand.

"My favorite emollient," he said. "Let me embrocate that for you."
Posted by Carolyn at 8:07 AM No comments:

Angel of the Night, pt 5

Maxine gave a nervous giggle. "Thanks, Hon," she simpered.

From the other side, Bernard patted her hand with his plump paw.

"Signorina," he said in a fake Italian accent. "Letta me bringa you fooda."

Rolf puffed his chest out and gave Bernard a dangerous look.

"I'll get the little lady her food!" He gave one fond glance to her and then narrowed his eyes at Bernard.

Maxine quivered in delight. Men were fighting over her!

"I'm not interested in an affray!" Bernard reassured. "By all means, you may collect the victuals. And in doing so, if you don't mind, bring mine too."
Posted by Carolyn at 9:44 PM No comments:

Angel of the Night, pt 4

They had reached their destination, and as Bernard searched his pockets for some smaller coins to make the tip split equitable, Maxine swung her fishnet-clad legs out of the cab and stood up, straightening her dress. Looking up, she sucked in her breath and took a step back.

A sultry-faced young buck had moved in for the kill. He tossed back his wavy black locks away from his deep blue eyes and lowered his chin to look into Maxine’s eyes. His steamy glance made her feel flushed and a little sweaty. He parked one hand on his slim hip and pursed his sensuous lips.

“Hi, Doll,” he said in a masculine drawl.

“Uh, hi there, Sweetie.” She noticed how his shirt buttons were straining against the movement of his strength underneath the material. What a hunk!

Since he just stood there, sweeping his smoldering gaze over her coiffed and heeled person, she spoke again.

“Going to the fandango?” Maxine motioned to the Catholic fellowship hall, from where the aroma of garlic and scorched pasta emanated.

“I am if you are. I’m Rolf, Rolfie to you,” he whispered intimately.

“I’m Maxine,” she managed to croak out.

“And I’m Bernard,” Maxine’s date announced as he stepped from the cab, still counting his coins. “Shall we remove ourselves from this adumbral street and join the merry throng?”
Posted by Carolyn at 8:00 AM 2 comments:

Angel of the Night, pt 3


Maxine’s hopes for her blind date were high as she smoothed her dress and turned the corner into the lobby. The man turned to greet her.

Oh Lordy, not that fat little kobold! she thought.

“You must be Maxine.” He said, “I’m Bernard,” and held out a plump, moist palm. “I envisioned that we’d gravitate to the Knights of Columbus spaghetti festivities this fair eventide.” Bernard’s eye twitched as he smiled a toothy grin.

“Sure, Honey,” she said. Linking his arm to avoid the clammy hand, they headed towards the waiting taxi.
The other couple inside squeezed over to make room.

"I find it far more commonsensical to share the fare when utilizing this form of transportation, don’t you assent to my pragmatism?"

By now Maxine was becoming quite excited. She had always been attracted to men who leaned toward sesquipedalia.
Posted by Carolyn at 8:00 AM No comments:

Angel of the Night, pt 2


Washing out the taste of last night’s cheap booze from her mouth, she vowed to stick to whiskey this time. Whiskey didn’t make her dizzy and forget stuff. She had another date tonight, and it just might be that he was THE ONE.

A good 2 hour’s work later, the map of hard years and long journeys that had been Maxine’s face was smoothed, filled in, leveled. Cover Girl and Max Factor had done their best, and Maxine was satisfied. Laying a pink chiffon scarf over her freshly picked and sprayed curls she pulled on a baby blue polyester sheath dress and adjusted her cleavage, pushing things up and moving them around as needed. A touch of powdered peach blush at the crossroads, and she was done.

“I’ll meet you in the lobby, Honey,” she replied into the microphone, her cigarette voice husky and low. She hurried down the hall, swaying in her 3 inch stilettos, a meretricious apparition to the leering apartment manager leaning against the door jamb dressed only in his sweatpants and wife-beater.
Posted by Carolyn at 8:00 AM No comments:

Angel of the Night, pt 1


Maxine moaned as the alarm clock buzzed in her ear. One long skinny arm shot out from the make-up stained sheets and slapped it into silence. The other arm appeared and slowly dragged the covers down off her head, the gray roots of her hair better matching the tired, lined face than the brassy, over-processed curls perched on top. Smacking her lips to bring the saliva back up, Maxine sat up in bed and reached for the remote. Damn! She’d missed “The Brave and the Bold” again! It was already 3 PM. Worthless alarm clock! She threw it against the closet door, and then, for good measure, threw a box of tissues at it.

Still smacking her mouth, Maxine slid out of bed and pushed her bunions into the ragged terry slippers waiting there. On her way to the bathroom, she detoured a little to walk by the mirror. Lookin’ good, Sista! You go! Maxine smiled coyly at herself as she fluffed her frizzy curls around her face, ignoring the flat back of her bed-hair. Stepping over the box of tissues she paused at the window, just in case the peeper in the conterminous apartment was watching and then stepped into the bathroom, pulling the string that turned the overhead bulb on.
Posted by Carolyn at 8:00 AM 2 comments: 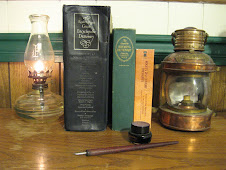 "Do not talk to me of Archimedes' lever. He was an absent-minded person with a mathematical imagination. Mathematics command my respect, but I have no use for engines. Give me the right word and the right accent and I will move the world."

The following stories are likely to be off-the-cuff, purple, stupid, and/or strange. Any literary merit is strictly accidental. The introduction of a new word in your vocabulary is strictly on purpose.